The Pileated Woodpecker is the largest of all North American woodpeckers.

The Ivory-billed Woodpecker is larger, its sightings (Ivory-billed) are such that they are considered near or at extinction.

Feeding Habits What They Eat

The Pileated Woodpeckers' diet in the wild mainly consists of Carpenter ants and beetle larvae. They also eat berries and nuts.

While going after carpenter ants, the Pileated will leave long gashes along the tree. They typically find these insects in decaying trees and logs.

With its sticky, barbed, long tongue, the bird can reach the insects deep inside the decaying wood.

By observing Pileated Woodpeckers, you may witness them performing a courtship dance.

This dance consists of one bird bowing, scraping, and stepping sideways in a circle around another bird.

Mating for life, pairs will stay together throughout the year. During Fall and Winter, the pairs roost and sleep at different locations during the night.

Males sometimes use the previous nest site as their nighttime roost.

Submitted by John From Virginia

The nest cavity is excavated in a dead or decaying tree 15-70 feet above the ground.

The Pileated's territory can be 150-200 acres. You can detect signs of their presence by looking for 3-6 inch holes in trees.

Using suet feeders can bring them closer for a good look.

The male selects the nest site, but both male and female will participate in the excavation with males doing most of the excavation.

The entrance hole is about 3 1/2 inches in diameter. The depth of the cavity is between 10-24 inches deep.

These large cavities may be used by Boreal Owls and Wood Ducks in future seasons.

Territories are defended throughout the year with some allowance for floaters to pass through.

The female will lay 3-5 white eggs with 4 eggs being the most common.

Both male and female will incubate the eggs (the gestation period is not the correct term for birds) for 15-16 days.

Both males and females will also feed the nestlings. The young will be in the nest for 24 - 28 days.

Once the young fledge, the adults and juvenile Pileated Woodpeckers will stay together until fall.

The adults will continue to feed and teach survival skills during this phase.

Around September, the family will break up and the young will find territories of their own. 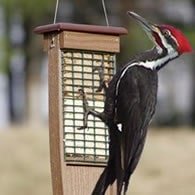 Only one brood is raised each season, but second attempts may happen if predators attack the first brood. Sometimes in the same cavity.

While pairs remain together for life, when one dies, the other will not abandon the territory. They will drum and call to attract a new mate from an adjacent territory.

While not a rare bird, they can be quite shy. Listen for low-pitched drumming that trails off in speed and volume at the end.

Follow the sound, and you just may find one.

This video was taken in my backyard in a sycamore tree. I spent about 3 hrs. in the tree to get this video of A Pileated Woodpecker feeding its Babies.

I hope everyone enjoys this video as much as I have. THANK YOU: Lamar
Attract More Woodpeckers With These Great Products

Pileated Woodpecker in HD Thanks Kevin