The Blue Jay is one of the most colorful birds to nest in our backyards and to visit our feeders.

Considered by some to be a bully at the bird feeder, most birdwatchers welcome this blue and white bird to our yards.

A fairly common bird east of the Rockies. Can be found in mixed forests and woodlands. Also in towns where large oaks provide a food source.

Placing peanuts on a platform feeder for them to eat is a sure fire way of attracting this bird for close up viewing.

Blue Jays are medium-sized ranging in length from 9 to 12 inches. Their crown and crest are gray-blue.

The wing and tail feathers are bright blue with white and black bands. Look for this birds narrow necklace of black feathers across the throat and around the head.

The upper parts are bluish gray and brightest on the rump. 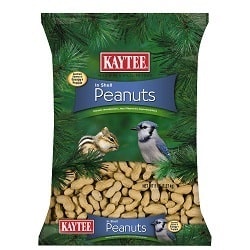 The lower breast, belly, and vent area are off-white. The bill, legs, feet, and eyes, are black. These birds have the ability to raise and lower their crest as they respond to their surroundings.

Feeding Habits/What Do They Eat

The diet of the Blue Jay consist of a variety of foods. These birds are intelligent and adaptable, they are quick to eat peanuts at bird feeders.

Purchase peanuts in the shell so it takes longer for them to go through them.

The shelled nuts can be offered in a Peanut Feeder that can keep the squirrels from getting the Blue Jays food. The Blue Jays will eat plenty!

Although known to rob nest of eggs and baby birds, only a very small percentage of their diet comes from these sources.

Typically, these birds are vegetarians and can be attracted to bird feeders with black-oil sunflower seed or peanuts to eat.

When feeding birds, I like to offer food types that are preferred by each individual species. They seem to prefer peanuts and are more likely to eat them than fighting for a single seed from the sunflower feeders.

I place peanuts (with shell) on a platform feeder to keep these birds happy and to make it easier for the smaller birds to feed from hanging feeders at the same time.

Watch them and you'll see as they hold the nuts with their feet and then crack the shell with their bill.

Often they'll cache their food. I was watching one day as the bird came for one peanut after another from the feeder in the backyard just to hide them in my front lawn.

I have to admit I stopped feeding peanuts for a few days and started placing fewer in the feeder when I started feeding again. I didn't want five pounds of peanuts in my lawn.

Beginning in early May, the courtship habits of this bird begins. Generally a group of seven or more are gathered together in the top of a tree. One female is among this group.

When the female flies off, the males will follow and land near her. Bobbing their heads up and down and displaying for her.

The female will eventually select a mate from this group and the nesting cycle will follow.

The nest is a bulky cup made of twigs, leaves, roots, grass, moss and sometimes held together by mud. Usually placed between 8 to 30 feet above ground.

You can try attracting these birds to nest in your backyard by placing a nesting shelf in a tree, or on the side of a garage or shed overlooking both open spaces and foliage.

Place the nesting shelf 10 to 12 feet above ground. Choose a location that provides protection from predators, elements, access, visibility, and varying sunlight.

The female lays 3 to 7 greenish buff, blue, or yellow eggs with brown or grey spots. Incubation last 17 to 18 days and is done primarily by the female although the male may provide some help.

The male will feed the female during incubation. She may leave from time to time to bathe and stretch.

The young will leave the nest in about 17 to 21 days after hatching. Both parents share in feeding the young birds.

After the nesting season in late summer and early fall these birds will travel in small flocks and family groups.

Although only partially migratory (mainly a permanent resident) sometimes flocks numbering over 100 can be spotted moving south.

Watch the Blue Jay Give His Call

Blue Jays are extremely territorial, often diving at cats, dogs, and even humans who get near nesting and feeding territories.

They may be loud and fly close enough to cause you to worry but don't. If they were to run into you it would be an accident. They will turn away.

The best thing is to try and stay out of the area for a few days if possible. Otherwise just limit the time you spend near their nest site or their young.

You also may be standing near their newly fledge young so be aware of your surroundings and act accordingly. They are just protecting their young and their food territories.

Don't make a big deal about this as you may never even see this behavior. Watch a baby Bluejay leave the nest.

Mainly found east of the Rocky Mountains, Blue Jays have been declining in numbers due in part from the reductions in forest and woodlands.

Specifically oak trees, which provide the acorns Blue Jays prefer to eat. So do what you can to help this bird thrive by providing food and water all year long. It's a little thing that can make a big difference.

Bluejays are good at imitating the sounds they hear around them.

Often when flying in to a birdfeeder they'll deliver the call of a Red-shouldered, Red-tailed or Cooper's Hawk call. They've been known to imitate Crows and Cats too. In captivity they have learned to make the sounds of some cell phones tones.

The predators of Blue Jay adults include Hawks and Owls.

Although not a primary food source for squirrels, the squirrels will eat the eggs and young of Blue Jays when food is in short supply or it's very convenient to do so.

The lifespan of Blue Jays average 7 years in the wild. The oldest banded bird was 26 years old.

First year birds have the highest mortality rate. If they survive their first year, they have a good chance of living many more years.