Since this original post, I have become quite experienced in helping these families to make it and to end up all together in the end when they are ready to follow their parents.

I have a couple who seem to nest there every spring. With no eggs lost. 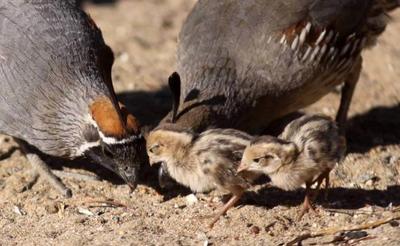 But, it is a hard life and hopefully more than a few will make it!

I thought I'd post a picture of our successes and the Proud parents!

Enjoy your bird watching, and when in doubt, always contact a bird expert!

At the present time, I am watching a pair of Loggerhead Shrikes as they nest.

These bandits are very capable of protecting their nest and hatchlings!

They are clever and have attitudes that don't quit!

Nothing comes near their tree! Can't wait to share them with you all!

A few years ago, we had a Quail pair, nesting on my patio in my brick flower planter. At either end of the planter are Rosemary bushes.

The soil is moist most always there, and they're nesting right under one of the bushes. Same spot as the other pair did. 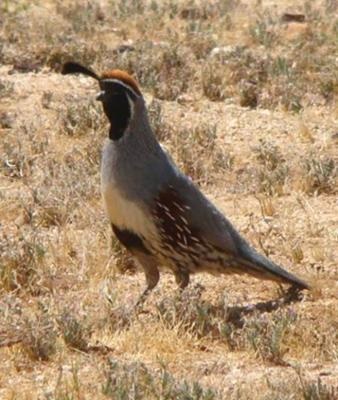 The only problem, is.. When the chicks are ready to follow mom and dad, they can't get out of the planter!

It sets about a foot to two feet down, and about three feet off the ground.

Though the parents are smart for choosing such a location, they don't realize what's to come.

With the last batch of chicks.. Mom and dad called feverishly to them, trying to get them to follow them on the ground.

Their persistent cries alerted us. They could not get out. I called a wildlife bird rescue and asked what I could do.

We rounded up all the babies.. SIXTEEN, corralled them into a box on its side and had to chase a few stragglers that we could not get into the box.

Once we knew all sixteen were in the box, we slowly walked out into the yard where mom and dad were nervously watching and calling.

We set the box down on its side near a bush, so they could pile out and then we quickly walked away.

Sure enough!! Mom and Dad flew to them, gathered them up, and the happy family walked single file off into the yard.. under a new bush to call home.

Oh boy, was it hard to catch those little things! And without hurting them! Like chasing chickens! It was quite an experience!

Guess we'll be doing the same thing this time around too.

I'll follow up, with nest pictures, eggs and then babies.. as soon as the blessed event happens!

They are the CUTEST little babies.. Quail. Until they become teenagers.. then they sort of look like miniature turkeys with out head feathers! HA! Trying to get up to the food Made it to the food and water!

The Three Amigos about 5 wks old

I live in the Phoenix, Arizona area. One day early in April, we saw a Gambel's quail egg in a large plant pot on our patio, set up about three feet from the ground.

Several days later I saw three eggs. After a little research, I discovered the female lays one egg every day or two until she has between 8 and 20, then starts to incubate them.

A little more research showed I could get "starter mash" from a feed store (they call it turkey starter mash and it's priced reasonably) and that I should put out a little food and water during incubation so the parent quails would know where it was.

The plant pot was situated by a window from our great room, so we were able to look in on the incubating female every day with minimal disturbance, peaking through the slats of the plantation shutters.

When I noticed they had hatched, I checked on them often and was able to take videos through the slats.

The next day we saw that the mom seemed to be urging the little ones to try to jump out of the pot.

Then I noticed the male out in the yard – one of the first times we had seen for any length of time.

A closer look showed us one of the little ones (only about an inch tall) had made it to the ground and the Dad was keeping an eye on him.

I was worried about the three-foot drop to the ground for the others, so I went onto the patio to bring the pot to the ground and tip it sideways so the little ones could run out.

They made lots of noises, and the male and female did their best to distract us with lots of wing flapping and calling out.

We left the patio quickly and continued to watch them from the windows.

We knew the mortality rate of baby quail was pretty high, so we did what we could to increase their chances of survival (we had 14 hatch in 2010 that left the yard after two and a half days, and the next day we saw them in the front of the yard, there was only five left).

I continued to put out food and water every day (when they were on the opposite side of the yard) and we blocked the bottom of the gate so they would stay confined to the backyard longer.

We spent many hours every day just watching them through our sliding door.

It was such great entertainment and so amazing to watch.

The male spent most of his time walking back and forth across the block wall at the back of the yard, while the female herded the little ones back and forth from west to east and back again.

At both back corners of the yard, we have raised planters (about a foot high, made with 4" stacking bricks) with bougainvillea growing in them.

One of the food and water stations was in the west planter where we could easily see it from the sliding door.

It was so comical to see the little ones running back and forth. Following the mom, they would run a little way, then stop to scratch up something from under the rose bushes.

Then they would take off again and there was always one little one left behind who would look up, see he was alone, and take off running.

You could almost see the bubble above its head saying "Hey, wait for me!" It was also funny to watch them trying to follow the female up into that raised planter.

They tried so hard, but at two days old, they could barely hop up four inches of the brick to get to the next level, but quickly learned that was how to get to the food and water.

We believe they spent their nights under the bougainvillea.

Soon we could see they were flying up one foot and didn’t need to hop up from brick to brick any longer.

The morning they were two weeks old, I looked out and saw the male and five of the little ones running around as usual.

Coming home a few hours later from running errands, my husband confirmed that was all he had seen.

The female and four of the little ones were gone.

We watched closely off and on all day hoping to see them again.

Late in the afternoon while I was watching, I was astonished to see one of the little ones fly from the raised planter all the way up to the top of the wall (around six feet up) where the male was.

A minute or two later, another one made it to the top of the wall (barely).

The other three were frantic down in the yard, but even though they tried very hard, they couldn’t make it to the top.

They tried flying halfway up the bougainvillea and taking off from there, but the perch was too wobbly for them to make it.

The two on the wall with the male flew down into the yard behind us.

We thought that was the last we'd see of them, and also assumed that was what had happened to the other four and the female – that they were all trying to get together somewhere else.

We figured we were lucky to have been able to watch them for two whole weeks this time.

Just before dark, we saw there were still three little ones in the yard.

We were astonished the next morning to see the male and all five of the little ones back in the yard.

I continued putting out food and water for another week (and water only after that), and we were rewarded to see the male and babies every day at different times.

Today is nine weeks since they hatched, and I'm thrilled to say the male and what we call "the three amigos" come to the yard every day.

I have continued to put out the water every day; twice a day since our temperatures have been averaging 115 the past week or two.

We sometimes see them early in the morning but can count on seeing them every evening between five and seven.

They are nearly as large as the male now and using the binoculars, we are pretty sure we can tell that two are males and the other is female.

The dark feathers on the head are becoming very evident on two of them.

Their top knots still look like a teenager with spiky hair.

It has been a joy to us and gives us hope they will be back next spring to hatch their own broods.

We never saw the female again after the two-week mark.

I have always thought the family unit stays together, so we have to assume something happened to her and the other babies.

We have also had some visits from other male and female pairs at various times.

When the chicks were little, "our" male confronted the others with lots of chest-bumping and feathers flying if they got too close to his brood.

I have attached a few photos. The first one is when they are a few hours old and still in the plant pot.

The second one shows them trying so hard to get up to where the female is.

The third shows them with the food and water by the bougainvillea, and the last one shows the male and "three amigos" from about three weeks ago.

They are much bigger now, and still, give us such pleasure every day.
Subscribe To Our YouTube Channel!