The American Goldfinch goes through a significant change in plumage as the seasons change from Winter to Spring and its mating and nesting habits begin.

Feeding Goldfinches into late Spring will give you the best opportunity to view the males brilliant yellow and black color combination.

About 5 inches in size, the male changes from a yellowish brown, with light yellow on the face and chin, wings black with white bars.

In summer, the male has a bright yellow body, black cap, wings and tail.

The females are yellowish green with black wings and tail during summer, changing to a grayish brown with very little yellow and dark brown wings with white wing bars in winter.

Attracting this bird to your backyard in winter can be as easy as placing a feeder filled with nyjer seed or hulled sunflower seed.

Be sure to keep your feeder stocked well into spring so that you can see the bright yellow of the male.

Long before the nesting season, the mating habits of the American Goldfinch begin. Usually there are several males vying for one female.

While there are short flutter flights high in the air between males, the most common behavior includes males chasing after the female.

Several male birds may chase the female for twenty minutes or more over a large area.

In the meantime these birds remain relatively quiet in and around their habitat.

In the western part of their range nesting may begin as early as May or June.

Typically, in the East, these birds don't begin nesting until August. Why is it that they nest so late as opposed to other song birds?

It's thought that the blooming period of the Thistle plant plays a part in the timing of their nesting. Thistle plants bloom in July and the downy like seed heads are a major nesting material.

Then, as late summer approaches, these Thistle plants set seed which is eaten by the adults and regurgitated to the young back at the nest.

The American Goldfinch prefers a habitat that is opened with a few shrubs and trees. They are likely to be found on farms and in backyard gardens.

The nest is made from strands of weeds and vines. Downy filaments such as the thistle disperses and caterpillar webbing are used to weave the cup shaped nest.

The nest can be so tightly woven as to hold water.

Once the nest is built, both male and female may leave the area. This may give the appearance that they have abandoned the nest.

In a few days they both return and the female begins laying eggs.

In some cases this can be two weeks after nest completion.

The nest is located 4 to 20 feet above ground in a shrub or tree. The female lays from 3 to 7 light blue eggs which are incubated for 12 to 14 days.

The female may spend ninety five percent of her time incubating the eggs. The male will feed her during this time allowing her to stay on the nest.

The young birds leave the nest in about 11 to 15 days after hatching.

The female builds the nest by herself. A second nest may be built by her while the male continues to feed the first broods fledglings. 2 broods may be raised each season.

Feeding Habits -What Do Goldfinch Eat 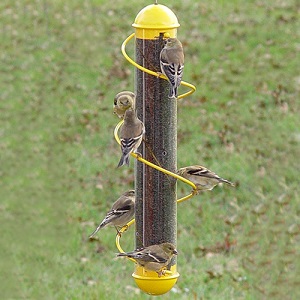 Goldfinches are easily attracted to bird feeders all year by supplying nyjer/thistle or hulled sunflower seed for them to eat.

When feeding their young, the parents fill their crops with seeds and maybe small aphids or caterpillars and regurgitate them part by part to the young birds.

This method allows them to feed each of the young birds each time they visit the nest.

Do Goldfinches Migrate South in Winter?

While it is considered a migrator, for most of the lower 48, the American Goldfinch is a permanent resident and does not go south in winter.

During the breeding season these Finches increase their range as far as mid-Alberta.

In winter, American Goldfinch will form flocks and feed together with little aggression towards each other. The males look more like the females during winter.

In order to help these birds as well as any others, consider providing a Heated Birdbath

Recommended Feeders For Goldfinches
Like Birds? Check Out These Magazines! A Perfect Gift Idea