Young Robin Not Ready to Fly Baby Robin Has Left the Nest

One morning I saw what I thought was a clump of leaves in my backyard but it turned out to be a baby robin.

At first, I thought the juvenile bird might be hurt so I quickly went inside to the internet to see what I should do.

This is when I learned that young birds will sometimes fledge before they are fully capable of flying and that the parents are usually aware of where it is and still caring for it. 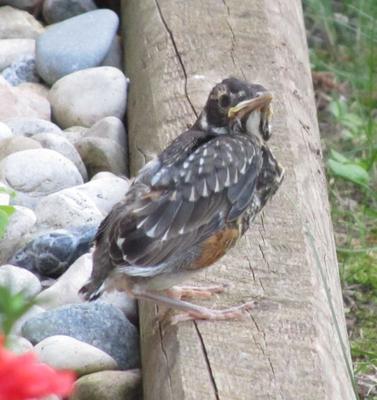 Baby Robin on Ground Waiting to be Fed

The juvenile robin had moved to a different spot when I returned outside.

As I quietly continued with my flower planting some distance away I saw him hop about to new places while he flapped his wings and chirped.

I then noticed an adult robin on the wire above my yard with worms in its mouth.

Another adult was in the tree and seemed to be talking to the little one.

These were the parents, and sure enough, they were still taking care of the little guy.

After a few minutes, one of the adults flew down into the yard a few feet away from the baby, and it hopped toward it.

The adult flew off suddenly and the baby hopped and flapped its wings as it tried to follow.

The adult almost seemed to be leading it.

The baby robin kept going until it was behind my garage and then hid in some tree branch debris.

I felt confident it was not in danger and went about my yard chores.

When I peeked again at dusk, the little one was on top of a pile of dried leaves, with its eyes closed (that quickly opened when it heard me!)

The next day I looked for him but he was gone.

I didn't think any more about it until I went back to cutting up more of the tree branches I'd recently taken down.

When I moved a certain branch out came the baby robin, flapping and hopping towards the back of the garage.

I was happy to see he was still okay and after a few minutes went to see where he'd ended up.

He was back on top of the pile of dried leaves and an adult robin was on the roof just above me chirping assertively at me.

I came back after a few minutes to take a photo of the baby robin I've now named "Peep".

I hope you enjoy the photos I have been able to take so far.


Scroll To Read Comments or Add Your Own About Baby Robins