It only took the first week of the purchase of my hanging plant before Carolina Wrens decided to nest inside of it.

This wasn't the first place this cute but greedy wren couple has been here to nest. 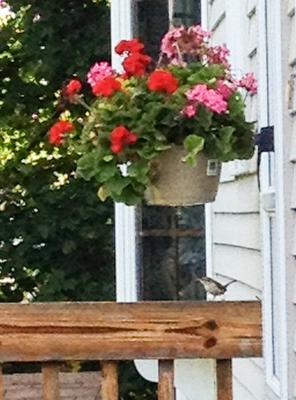 
They had built a nest under the deck too--"just in case" one home wasn't enough for the little missus.

He had to bring in just the right amount of tiny sticks or she'd complain!

He always had a good answer, but like a dutiful spouse, he complied. After all, who can live with a contentious female?

Later that week, so proud of his nest, I heard him tweet with pride at his accomplishment--making sure SHE could see.

Then "it" happened. The young wren couple had to endure the horror of "it" all "it's" smell and glass shattering sounds--(power washer!) She had flown from the nest in horror with him!

I thought they had abandoned the nest...until today!

Only one day after "it" left, she danced around in hysterics on the railing and she scolded even louder than ever!

Good gracious, I thought...and then I saw the problem. My bichon frise was waiting for me on the stairs...now the dog?

Mrs. Wren didn't WANT the dog on the deck. Too close! Too close! she screamed.

She twirled around angrier than ever and even caught the ears of her female counterparts--who swooped down to help.

They began to scold the male wren too! They flew back and forth in excitement.

Just as they were making their plan of attack, I scooped the dog up and brought her inside. Whew! Close call.

Mr. Wren will either get divorced or find another hanging plant to steal next time.