This spring my wren built it's nest in a "cheapy" wooden bird house that I had placed above my light fixture on my back porch. I noticed the activity there when I returned from a trip.

The activity meant the eggs had hatched and one morning I opened my door & saw a "tiny, tiny" chick laying on my deck.

It was moving so I picked it up with a paper towel, so as not to touch it and attempted to "put it back into the nest", but the hole was too small & I was worried I would hurt it.

So I was going to try to "build a makeshift nest" to place below the box and then remembered that a wren had built a nest in one of my flower pots on the front porch the year before.

The nest was still intact in the pot, so I very gently placed the "little birdie" securely into the nest, went online to see what I could feed it & began feeding tiny tiny pieces of grape and red meat with a pair of tweezers.

The chickie barely had feathers at that time but responded to food.

I placed that flower pot on a table just below the nest which was up high on the light fixture, & sat for one entire day watching to see if the Mom & Dad would feed it's young that fell out of the nest.

By the second morning, the parents began to feed it, I continued for a couple days to feed it also since I felt it's growth had been stunted.

The "great NEWS" of this story is that the parents then continued feeding and the "Rescued" Wren came out of the "transplanted nest" one day later than the "two" little ones that survived in the nest.

They allowed me to get "very close" to take pictures which are attached.

I will attempt to send one more picture of my "Rescued Baby". I was very thrilled. 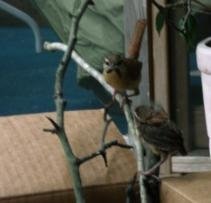 This is my "Rescued" Baby being fed by Momma.

I even placed a box & branches below the nest when I saw the Momma was trying to encourage the baby from the nest.

What a wonderful story!