Robin Nest Fell Out of Tree How We Saved The Baby

I was having some overgrown tree shrubbery removed from my back yard. With the felling of the first tree, a Robin's nest was dislodged.

The man cutting the trees called out to me. I could hear an urgency in the tone of his voice. I ran to see what was wrong. 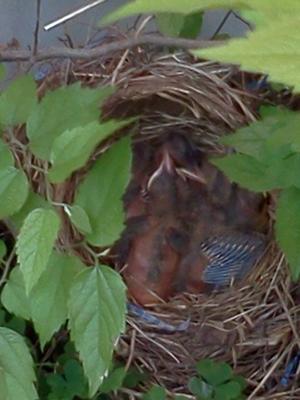 He said I didn't know there was a nest in the tree. He said it was full of baby birds and they were thrown all over the place.

I scanned the area and didn't see the babies at first. I asked where they were.

He pointed to one on the ground about two feet from my feet. It didn't look like what I had in my mind.

The baby birds were fleshy pink, noticeable white beaks and what I can only describe as starter feathers. There were four baby birds.

I asked are they alive? He said he didn't know. I studied them for a moment and noticed movement. All four of them were moving! My heart sank.

I thought, what am I going to do? I felt this overwhelming urge to save them.

I asked where's the nest? He pointed to the nest. It was as if the nest went one way and the baby birds another.

I felt I needed to move quickly if I was going to save them.

As I started to pick up the nest, I remembered being told something about not touching a bird's nest or nestlings with your bare hands... so off I ran to get gloves.

With gloved hands I gently picked up the nest and placed all four baby birds back in it.

They quickly huddled together in the center of the nest. I looked around for some place to put the nest.

I put the nest in a small tree in the corner of my yard about 25 ft south of where the nest was.

I felt okay with that until I saw a Robin on the fence where the tree had been.

She had a worm in her mouth and appeared to be looking for the nest.

She flew down landing on the freshly cut stump. The Robin did this several times.

It occurred to me she or he didn't understand what had happened.

After a few minutes of watching this behavior, I thought I needed to put the nest closer to where the original nest site.

Still wearing gloves I moved the nest to a mulched area on the side of the house directly across from where the tree stump. HALLELUJAH!!!

The parent bird found the nest and fed those babies! I was thrilled.

Then, I thought about roaming cats, snakes and my little Chihuahua... and knew this was not a safe place for the babies.

I prayed for some divine inspiration as to a safer placement of the nest.

I had a large potted plant (some woody weed growing in a pot on my deck). I thought, well it would at least get them off the ground, about 18" off the ground.

I put the nest inside the pot and watched to see if the mother would be okay with that.

It took her a moment but she adjusted to that as well.

I watched them for a while. That's when I noticed that there were two adult Robins and they were both feeding the babies!

Just like the Red Shoulder Hawks I had the privilege of watching when they nested in tree in my mother's front yard.

I was and am somewhat okay with my attempt to save the baby Robins. Then it rained that night.

I was worried, because they didn't have a barrier like they had in that densely leaved tree shrub.

As soon as I woke up the next morning I ran out to see if they were still okay.

The mother was there with her wings covering the nest.

The sun came out and I saw the mother shaking water off herself as she perched on top of the fence. (I assume it was the mother).

I decided to get a large umbrella to somehow affix over the pot to keep the rain off the nest.

It's temporary, until I can figure out something else.

This encounter with the Robins led me to research their nesting habits and therefore to this site on the internet and now an opportunity to share my story.

Thanks to this site I have learned of a better location for nest... a NESTING SHELF!!

I am off to find and install a nesting shelf for my Robin family. Thank you Wild Bird Watching.

A couple of things here. First, keeping a nest as close as possible to the original location is the best.

A nesting shelf isn't really needed, the adults will shelter the young. Since this nest had young it's less likely to be abandoned than a nest of eggs.

Second: You don't need gloves other than for yourself when handling birds.

Songbirds have a very poor sense of smell and will not abandoned eggs or young because of humans touching them. This is a myth.

Thank you for taking care of our birds. A great story.