This is a very interesting image. I sat on the deck for a few hours watching both parents feeding the chicks.

House Wren Removing Something From Nest

However, this picture caught me by surprise.

Instead of feeding the babies, she was actually removing something. 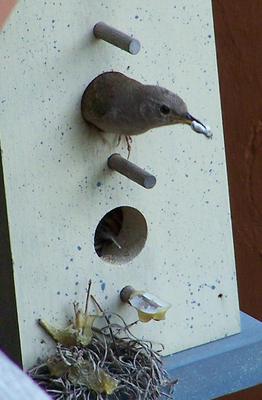 I saw this 3 times in the few hours I was watching them. Anybody know what she might be removing?

I also noticed, around the time I was taking this picture, that I was getting scolded by one of the parents.

Apparently they didn't like me taking so many pictures.

I know I was being scolded because she did the same chirping a few other times while I was about 5 feet away painting my deck.

When you're around the same family for several weeks, and seeing them so often, you get to know the sounds.

I just hope I get to see them fly off. Which leads me to another question.

Once the young fly out of the nest, do they ever return for any reason (other than maybe to return next year for another nesting)?

The Wren is removing the fecal sac from the young. Their waste is contained in a gelatin like sac.

Many of our backyard birds deal with the waste in this manner.

It keeps the nest cleaner but more importantly, it keeps the odors down which would attract predators.

The young House Wrens will not return to the nest site after fledging.