We had been watching the blue birds build the nest for several days.

The time came for the egg-laying, we were so excited, this had been the third try for them.

For the prior two had ended in disaster, the first eggs a rat snake had gotten into, the second we don't know what happened the baby's had just vanished. 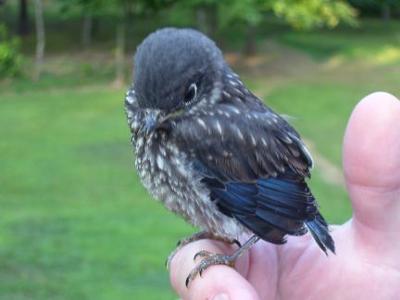 Anyway this time things looked like they were going to turn out okay.

When the nestlings were ten days old the female failed to return to the nest, we assumed something had happened to her.

The male kept up his duties just like clock-work, when on the twelfth day the male failed to return.

We decided to try and feed them ourselves with whatever insects we could catch. When it came time for them to fledge we noticed only one came out of the box, to our dismay, when we opened the box we found three of the birds dead.

We have taken the only survivor "Petie" into our care and doing the best we can in order for him to make it on his own.

The Habits of Bluebirds