By mid-April, the Orchard Oriole arrives from its wintering grounds in southern Mexico and Columbia.

Males begin singing their flute-like song to announce their territory and to attract a mate so they can begin their nesting habits.

Orchard Orioles breed in nearly all states east of the Rockies. But it's a short season, lasting about 2 1/2 months.

The Orchard Oriole is a small passerine bird that is a member of the oriole family. Measuring 7 to 7-1/2 inches in size.

The male Orchard Oriole is easily identifiable by his reddish-brown belly and rump. The male's head, wings, and tail are black.

The female looks much different and her colors are more subdued. The female has a yellow breast and an olive-green back. Her wings have two white wing bars.

Immature males look similar to females in their first year. The following spring there are some changes.

While still looking like female Orchard Orioles, immature males will have black throats, black upper breast, and some reddish-brown plumage mixed in.

Orchard Orioles, like many bird species, have a variety of courtship behaviors that they use to attract a mate.

These behaviors can include singing, displaying, and offering food to a potential mate.

During the breeding season, females are more attracted to second-year or older males than to first-year males.

The female may also solicit food from the male by begging or displaying a begging posture.

Pairs are believed to be seasonally monogamous but do not mate for life. Pairs stay together for second broods.

When it comes to nesting, orchard orioles will nest in small or large trees anywhere from 6 to 20 feet above the ground.

Unlike other bird species, they do not defend nesting territories. However, they will defend their feeding territories from the same species during the breeding season.

They typically build their nests using grasses, fibers, and other plant materials, forming a cup-shaped structure that is lined with feathers or other soft materials.

The bottom of these nests is sometimes so loosely woven to where it's possible to see through them. Still strong enough for eggs and young.

The female orchard oriole typically lays a clutch of three to five eggs that are pale-grayish blue with dark marks. She alone incubates the eggs.

The male will feed the female while she is incubating. Incubation last 12 to 14 days. Males and females share feeding the young in the nest.

The young will leave the nest in 13 to 14 days after hatching.

An interesting habit of these birds is that they split the fledglings into two separate groups, each adult caring for half.

The female will build a new nest about 5 days after the first brood fledges if a second brood is going to take place.

The breeding and fledging season is over by late July to early August, and the fall migration begins.

Orchard orioles do not reuse nests from year to year. Although, they will often use the same tree in successive seasons.

Orchard orioles are omnivorous birds that feed on a variety of insects, fruits, and nectar. They glean insects from trees and shrubs. They rarely feed on the ground.

During spring migration and the breeding season, insects are the primary food source.

After the young fledge and toward the fall migration, their diet is mostly fruit.

Favorite types of fruits include cherries, apples, and grapes. They are also attracted to nectar from flowers.

You can attract orchard orioles to your feeders by offering grape jelly and orange halves ahead of the fall migration.

Due to their fondness for nectar, Orchard Orioles may also like your hummingbird feeder.

It is important to provide a varied diet for these birds, as different types of food provide different nutrients that are essential for their health and well-being.

There are several potential predators of orchard orioles, including:

Some species of snakes, such as rat snakes and garter snakes, are known to prey on small birds

Some larger birds, such as crows, grackles, and jays may attack eggs and young in the nest

Cowbirds often lay their eggs in Orchard Oriole nests. This may cause nest abandonment or the Oriole may raise the Cowbird.

It's important to note that orchard orioles are also vulnerable to human-related threats, such as habitat destruction and spraying orchards.

These threats can affect the overall population and make them more vulnerable to predation. 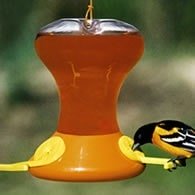