Mourning Dove Laying Egg With No Nest on Burglar Proof

Something strange happened. A mourning dove rested on the burglar proofing of my front door upstairs.

The door was open and the French patterned burglar proof was locked. 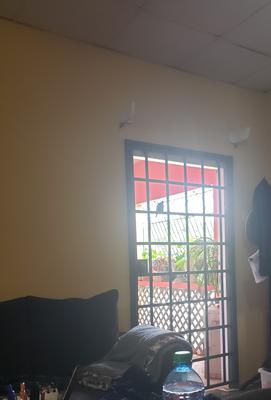 Door Where Egg Was Dropped

The dove landed on the 2nd set of railing as I sat a short distance away on my office chair with the bird watching me.


I found it strange that the bird remained there for about 30 minutes without flying away but I was having a virtual court hearing that day so I could not look at the dove for the entire period.

In fact, I was taking judgment in an old matter in which the Claimant had died and her son continued an appeal to enforce his mother's rights.

I won the appeal.

As I was watching the bird, I thought that it must be a victory sign.

When I obtained judgement in my favour, I got up from the computer to change my robe so I had to go to the robing rack in the corner close to the front door where the dove was still perched.

As I moved towards the door, the mourning dove flew away.

When I went to the front door I noticed a freshly broken dove's egg in the door way.

It turned out that the mourning dove laid its egg in open air while perched on the burglar proofing.

Can anyone shed some light on this strange mourning dove's behaviour?

This is a photograph of the dove perched on my front door showing where it stood when it laid its egg in open air while perched on the burglar proof.