side view of bird feeder feeder with birds on the outside feeder showing birds on the inside


The small birds in my garden were being intimidated by the crows and starlings so I built this feeder so they could eat in peace.

I wasn't sure if they would use it so I fitted plenty of small windows measuring 35mm x 35mm so lots of light would get in and they wouldn't feel trapped. 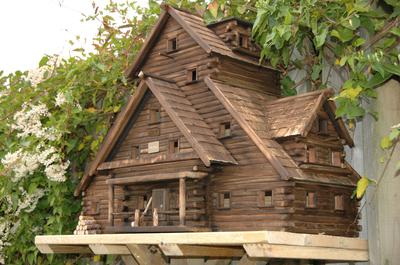 Great Tits began arriving followed by a couple of Chaffinches and then a Robin.

It was a little frustrating not knowing what was going on inside so I bought a pin hole camera and connected that to my wife's laptop.

This opened up a whole new world for us, we could see exactly what was going on and everything appeared to be working exactly as I had planned. 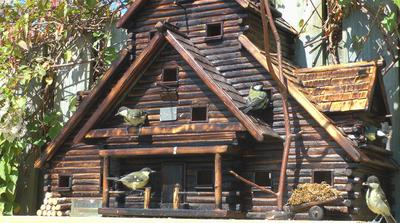 However peace and tranquility was short lived, a young starling managed to get in and was causing havoc because it couldn't get out again.

(Plan B). I modified all the windows by adding a small piece of doweling to each window ledge, this made the windows slightly smaller to keep them out, it also gave the birds a better foothold on the window ledge.

Just when I thought everything was going my way disaster struck again, the sparrows suddenly decided the house belonged to them and started to fight with the Great Tits and Chaffinches, they were even fighting amongst themselves.

Sadly the Chaffinches and Great Tits were driven out and the sparrows took over.

The Great Tits still drop in but they only use it as a take away now, just dart in to grab something and flee for their lives.

We have lots of Blue Tits in the garden but they have never used the feeder, perhaps they know a lot more about sparrows than the Great Tits do.

My wife is fascinated by the whole thing, she sits for hours watching the birds exert authority on each other. 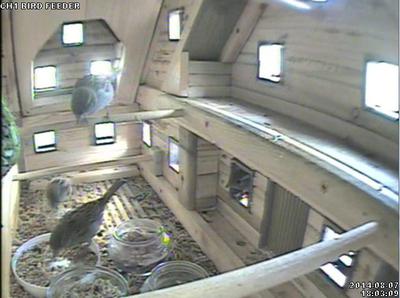 She has a sparrow called "Ruffles", so called because of his bedraggled appearance and the fact he stands by the window fighting off all the other hungry sparrows.

She thinks he's the self appointed landlord.

Later in the evening when all the other sparrows have gone home he sits and roosts like a hen, sometimes joined by another sparrow who she calls "Breathless", this appears to be his buddy.

There they both sit side by side looking out the window while they fall asleep.

When dusk descends Ruffles is always the last one to leave the house, were he goes nobody knows but he's always back again at the crack of dawn, picked up on the motion detect camera.

I'm currently trying to design a smaller house for Blue Tits but so far the sparrows are still getting in. I'm determined not to give up though.