Visiting my mother recently I saw a mourning dove nesting on top of a pillar under the porch roof.

Not unusual, though last year they selected her neighbors, while other birds chose moms.

There was a broken egg on the porch so I assumed she was sitting on one egg. 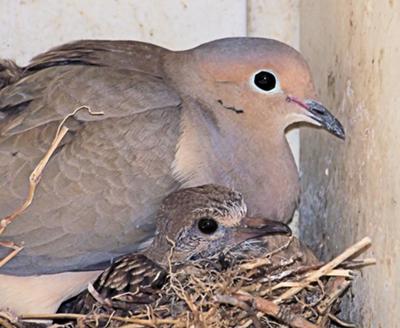 What surprised us was the nest. It was actually a stack of three nests.

The bottom one had been used by house finches last year, then a robin built a nest over that one.

This year the mourning doves then built one of their flimsy nests on top of that!

No surprise an egg ended up on the porch, there wasn't much room up there!

Mom had planned on getting rid of the double nest, but those mourning doves got an early start, despite the continuing cold weather.

Two days later I stopped to photograph the dove sitting on her egg. I took a lot of photos, then returned the camera to the car.

When I came back to the porch I looked at the nest and thought I saw something.

On closer inspection, I saw a little black eye blinking! I got the camera again as the young bird poked his head out.

He pulled back in when I got close, under the protection of his parents wing. But I saw he was good size.

We were shocked since we thought there was only an egg in there, since it was so early in the season.

We were watching the other birds,Finches and Robins checking out places for nests and just starting to build.

The next morning I stopped again at my moms. The young bird was very active and fought his way out from under his mom this time to check us out, despite her trying to get him to get back under her wing.

She finally got him under her, but he started stretching and pushing and out he popped again for more photo opportunities.

I heard the other parent calling, so we went into the house and within seconds here came the daddy dove to trade places, and we watched as he fed the young bird, giving us more opportunity to see his size.

Again I was surprised as he was already similar in size of a dove I watched fledge last year!

On the third morning I stopped just as the daddy dove came back.

This time they only fed the young bird a little bit and both parents left the nest! They didn't go far, calling out to him often.

He moved in circles around his nest, then would stand on the edge and start to stretch his wings, look down and quick huddle back in his nest.

He would then repeat his actions. One of the parents came back two more times to the nest.

Then it stayed relatively close, softly cooing and whistling along with the other parent.

At one point she perched on the neighbors porch post, and I saw her leaning her head against the wall each time she wanted to coo.

I assume she was merely getting her head/neck in the proper position to call encouragement to the young one.

The 4th morning the young dove was gone. The female dove was on the neighbors porch post, and the male was on the porch, watching as the female called to him and moved around on the post, seemingly to do a mating ritual.

The male finally flew to her and started to groom her and pick at her feathers.

At one point though the female seemed annoyed with his constant attention.

Then the male flew off, only to return a few minutes later with some sticks, stood on the female to hand it off and took off again in search of more sticks.

The female walked around in circles on the sticks. Finally she flew off, meeting him on the ground before going out of my eye sight.

My mother called me the next day to let me know they had returned to their original nest, having added a few more sticks.

It's hard to imagine that they can fit two eggs/young in there, but we'll just have to wait and see what happens.

A nearby Robin I'd been watching was still working on building her FIRST nest!

I took many photos and it's hard to choose just one!