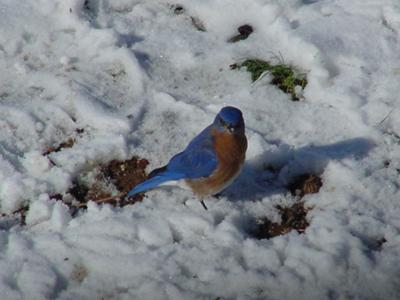 I found out quickly that if you put up more than one bluebird house you will get a show you did not expect.


I thought it would look so cute to put 3 or 4 together like a small village.

Well...my beautiful pair that come back year after year, (I think!) moved into the village and I was thrilled.

I then waited for some of their friends to move in.

To my great satisfaction, another pair showed up.

I have a long front porch with a swing and I spent many garden breaks on that swing watching as the male stood guard and the female built her nest.

All this time I thought I had two pairs of bluebirds in my little village.

It took me a couple of weeks to realize that the same pair had built a nest in each of the 4 bluebird houses.

They finally chose one to lay their eggs and raise their young.

They were also very successful in running off any other bluebirds.

They also ran off a pair of Chickadees that tried to move into the village.

I was amazed that they would keep going from house to house even after the mama laid her eggs.

I am not sure if they were using the other houses as decoys or if they were just trying out each one to see which they liked.

This pair raised three sets of young over the summer months.

So here it is, fall, it is almost Halloween and the days are getting short and cool.

I was pretty sure my pair had moved on for the winter.

It is cold and raining today and I was standing at the back window looking out into the yard at the birds.

I have several feeders and love to watch them.

Soon I saw a little fat bird all puffed up sitting on the deck railing.

She looked very familiar and it took me a minute to realize she was a young female bluebird here in winter.

The next thing I see she has a bit of moss in her beak and she flies to one of the bluebird houses and goes in. I am astounded!

This is a new pair, the female is very small, much smaller than my regular pair.

Soon the male, gorgeous blue, streaks in and joins her.

He sits on the top of the house and surveys his domain. Ready to protect his coming brood!

I have never had any of my bluebirds stay into November and build a nest at this time of the year, nearly winter.

The good news is that here in the Atlanta, Georgia area we don't get really cold weather until late December and January.

I would love to hear of any other bluebirds nesting at this time of the year.

Oh and by the way...I separated all the blue bird houses so I would hopefully get more pairs.

We will see how this all works out.

Eastern Bluebirds in the Northeast are only partially migratory. If there is food scarcity they will move southward.

Those that breed in southern Canada and the northern US are the most likely to travel south to Texas or the southeastern states.

Most will stay year-round which offers them a better survival rate due to less energy being used up by migrating.

So, enjoy your bluebirds in winter.