Three Bluebird Houses and More Planned For Our Five Acres 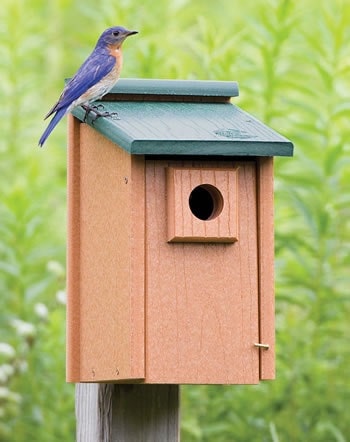 There are now three family's of Eastern Bluebirds on our location here in norther Georgia, near Lake Lanier. They have been here for at least ten years.

We have their houses placed in trees about four feet from the ground approx. 100 ft. or more apart from each tree.


All of out Bluebirds are large and look very healthy with extremely vivid colors. We really enjoy watching them daily out of our large kitchen windows.

We have a Bird sanctuary right next to the windows, with seven feeders of all types. All are hand made by my son Dan who has been interested in birds all his life. He is now 54.

We have Woodpeckers, Brown Thrashers, lots of Cardinals,(Vivid Red males)yellow birds, Blue Buntings, Chickadees, Titmouse, lots of Dove, sparrows of all types, Wrens, and many others.

In addition there are two Hummingbird feeders hanging right next to the window. They will arrive on April 15th every year, and leave in October.

They are very aggressive and possessive of their feeders. They actually set for several minutes guarding what they think is their private feeder.

One thing we find odd is the Eastern Bluebird visits our bird feeders several times a day, setting on one of several posts in among the feeders.

He will set there for ten or 15 minutes, leave and come back an hour or so later. We are now building a feeder for the Eastern Bluebirds,but not sure where to place it among the other feeders.

In addition, there are several family's of Mockingbirds that actually chase away the Squirrel's, pecking at them as they run away into the woods.

Even though they do not eat the Bird seed, they seem to want to protect the other Birds.


We have to watch out for Hawks, and scare them off when they come near, once in a while they will dine on one of the Morning Doves.

In the spring time we observe some very odd behavior among some of the younger birds.

On several occasions we have observed very young Sparrows actually feeding baby Cardinals that sit in the feeders crying with their mouths open, like they do in their nests.

This has happened on a a regular basis all spring.

For some reason, Male Cardinals will feed their female partners. The female just sits there and waits for the male to feed her sunflower seeds.

Our Woodpeckers are some of the most fun to watch, both male and female.

The way they will eat upside down, or hang on and reach all the way over to the seed.