One morning I went out to refill my Goldfinch feeders.

I glanced down and realized that I almost stepped on a scrawny, tan bird.

I looked closely and realized that this bird was missing most of the feathers out of the back of his head and looked sick. 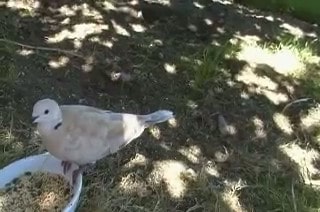 The bird seemed unable to fly, and I observed that it would jump up on a branch that I had trimmed off my rhododendron.

I began to feed Ricardo each day and put a little bowl of water out for him.

At night he continued to sleep on the rhododendron branch which must have been concealing him from my cat, Larry.

Weeks have gone by and Ricardo began to improve. He was able to fly up into the dogwood tree that held my Goldfinch feeders. He even grew the feathers back in his head.

I eventually bought a bird bath. Ricardo likes to bathe a few times a day. Another Mourning Dove has been hanging around.

It is much larger and healthier than Ricardo, so now I think that Ricardo is actually a girl.

Ricardo has never let me pick her up, but I am able to sit inches away from her. She follows me around when I do yard work in the front area by her feeder.

She came in while I was cleaning the garage and hung around for about 30 minutes. I was worried that Larry would find Ricardo there, so I coaxed her back to the front of the house with some seed.

The saga of Ricardo continues. I'm not sure if she will be able to fly away to warmer weather.

If not, I may have to build a little birdhouse.