The Story of Joe Robinson

Outside on my deck, I have a pergola and Momma robin built a nest in it.

It wasn't the ideal place to build a nest as it was narrow to raise a family of 3.

So Momma took care of her young babies in the nest despite its inability to hold her babies. 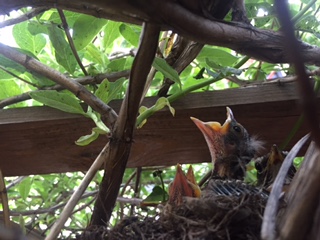 Unfortunately, one fell out of the nest (it was completely formed but without a solid coat of feathers) and it was lying on the deck.

I picked it up and my 23 month old grandson watched.

It was cold and I knew it was dead; I explained to my curious little grandson it was a baby bird.

I wrapped up the baby bird and put it aside to bury later.

I went inside to wash my hands and I heard my grandson (who just started talking) yelling "bird, bird, bird."

Not sure what he saw or was doing I ran outside to him pointing to the ground at another baby who fell out of the nest. 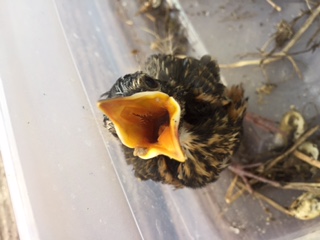 It was in the nest but its head was hanging out and I didn't think it was going to be okay.

I rechecked the bird that evening to find it in the same position and then again the very next morning.

When I looked in the am, it was not in the position I last saw it last.

I scoured the area to see if it had fallen out of the nest and was lying on the deck and it was nowhere to be found.

So, I waited and watched as Momma flew into the nest and I saw 2 little heads pop up for Momma to feed them.

Whew, relieved they both were alive!

But it was only a few days later that the nest became too small as the little birds grew and one fell out but Momma would not let me near the nest to put it back.

I had no choice but to care for the little one. I got a shoe box and began to care for it myself.

As it got bigger it eventually moved out of the shoebox and lived free range on puppy pee pads by my deck door.

Momma continued to feed Joe by coming on the deck and meeting the baby to feed it. 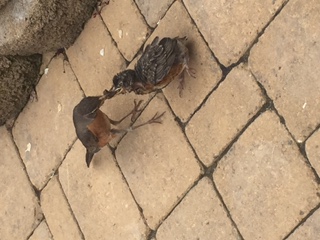 I would retrieve Joe to come back inside for safekeeping and we did this for days.

At night, Joe would sleep as soon as the sun went down and be awake chirping at 0610 to be fed.

Joe became a neighborhood icon, everybody was in amazement that I was raising this bird.

The baby robin would perch on me, and Momma trusted me enough that she came close to me for its feedings.

Everyone who watched could not believe the sight of Momma feeding Joe right in front of their eyes.

I left Joe out a few evenings ago for a feeding and he proceeded to fly away into a nearby tree.

I tried my best to get him back inside as I feared a ground predator would get him if he stayed out all night.

However, despite the rainy night, I found Joe (by the sound of his chirp) the next day in a tree a few houses away not far from my home.

This morning I heard Joe close by under a neighbor's deck.

I was able to pet him and have him crawl on my hand and he seemed very comfortable with our familiarity. 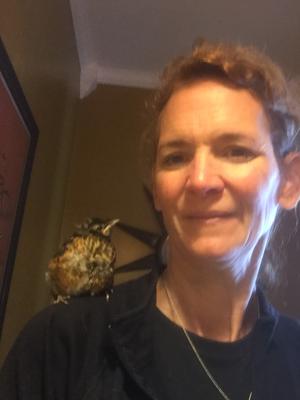 I hope that Joe will stay in the area as he is an important lesson in nature and part of my life.